Coconut, brown and hairy on the outside, white and creamy on the inside, is a fruit which grows on trees and is widely found in the tropics and subtropics. Most parts of the tree and fruit can be used for a range of culinary and non culinary uses, earning it the Malayan title of ‘the tree of one thousand uses’. Requiring a consistently warm climate to grow, coconuts struggle to survive in Canada, thus making them one of the most imported foods in Canada.

An Introduction to Coconut

Coconut is from the Arecaceae family, also known as the palm family. Where the plant originates is somewhat debatable, with theories stretching from the Americas, Indo-Pacific region, and Australia. The coconut tree grows up to 20 metres tall with large sweeping leaves about 6 metres long, producing the first fruit at about 6-10 years, but not producing its peak crop until 15-20 years old.

The fruit of the coconut yields milk, oil, water, flour and solids, making it an extremely versatile fruit for cooking and baking.  Coconut is gluten-free, high in iron, potassium and vitamin C, and has no cholesterol. Research into the health benefits of coconut is extensive, suggesting that it helps to balance the immune system, and has anti-bacterial, anti-viral and anti-fungal properties. 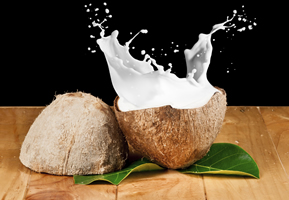 Each of the different food products extracted from the coconut fruit provide different nutritional goodness. The flesh of the fruit is a good source of the B-vitamins and potassium, while coconut oil is one of the healthiest oils available. It has been seen as a superfood in India, Sri Lanka, Thailand and the Philippines, but it is only recently becoming more popular in Canada. It is high in lauric acid, a type of fat which promotes good cholesterol and lowers bad cholesterol.

Coconut water is the substance you hear inside a coconut when you pick up a whole coconut and shake it. The water is very refreshing, and healthy too, containing more potassium than four bananas, is low in calories, and cholesterol-free. 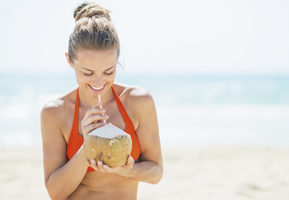 The list of health benefits attributed to coconut is extensive. Most people notice that the amount of fat in coconut is very high, but it is important to identify the difference between fats.

The fat in coconut is a healthy type of saturated fat, which the body immediately burns rather than storing. This means that coconut is a good source of energy.

In fact, coconuts are becoming more and more popular as an important part of weight-loss programmes. They reduce appetite, making those on a diet less likely to be tempted by sneaky snacks. Not only this, but it helps to reduce sugar cravings by slowing down fluctuations in blood sugar levels, and improves insulin secretion.

Coconuts are found to have anti-bacterial, anti-fungal and anti-viral properties. These actions are largely attributed to a component called lauric acid, which is found mostly in coconut oil.

Coconut water is an excellent source of hydration, as it is very high in electrolytes. Not only this, but it is sterile, and during WWII it was even used in emergency blood plasma transfusions, when accessibility to plasma was scarce.