home / nutrition / ingredients / kale / how to cook with kale

How to cook with kale

Though kale can be eaten raw, and is popular in salads, many people prefer to cook kale as it softens the texture of the leaves, and can reduce the bitter flavour. It is a versatile vegetable that can be served in many ways, and often people find a ‘favourite’ way of cooking kale.

Boiling kale is the most traditional or standard way of cooking kale in the UK, but it is important not to boil kale for too long, or it will become mushy and lose the colour and flavour. In general, the tough centre stalk is trimmed away, and the leaves are boiled, either whole or shredded. Kale leaves take only a few minutes to boil, and are ready to eat once the leaves are beginning to wilt. 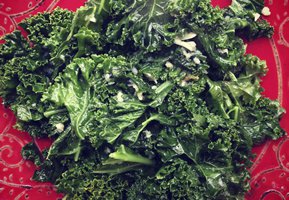 Sautéing food is cooking and browning it, but maintaining its texture, flavour and colour. It is done quickly and in a hot pan. A small amount of extra virgin olive oil in the pan produces the best results when sautéing as it is the most stable at high temperature.

Sautéing kale takes about 15 minutes. Spread a little oil in the pan and when it is very hot add a thin layer of kale to the pan. Keep the kale moving in the pan so that it doesn’t burn. Kale is often sautéed with a little garlic, onion, chilli, salt and pepper in order to enhance the flavour.

Steaming vegetables is a method of cooking dating back 10,000 years. It is often seen as a very healthy way of cooking as the nutrients and vitamins in the food are preserved. Steaming involves placing the food over but not in boiling water, and allowing the steam from the water to cook the vegetables.

Steaming kale will take 5-10 minutes, depending on how much kale you are cooking, and how well done you like the vegetable to be cooked. In general, kale is ready once the leaves are tender and wilted but not losing its colour or turning mushy. 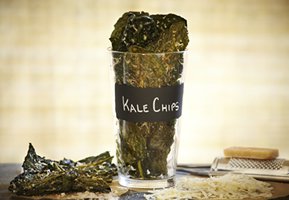 Kale chips or crisps is becoming a more and more popular way of serving kale, as a healthy snack. As when preparing kale in any other way, the tough stalk is usually removed, and the leaves are used. Make sure the leaves are washed and dried thoroughly before baking as any water droplets left on the leaves can cause your crisps to turn soggy.

The leaves are placed on a baking tray with a little oil and seasoning and baked for approximately 20 minutes or until turning crisp. It is worth turning the leaves halfway through baking to ensure an even crispness. The leaves also become slightly crispier during cooling so it is worth leaving the leaves for a few minutes before indulging.

How to grow kale

Kale, part of the cabbage family, is a very hardy vegetable that grows well even in a fairly harsh environment.

How to grow kale >

Packed with so many vitamins and minerals, the health benefits of kale are extensive.

Learn about the health benefits of kale >

The cranberries and tomatoes add a splash of colour to this salad. I love this refreshing salad at lunchtime on a hot summer’s day.

Crunchy, full of flavour, totally moreish, but so healthy, these guilt-free kale chips are my favourite snack. Not only that, but they are quick and easy to make.

Warm, comforting and with a spicy kick, I love to settle down to a bowl of this hearty soup on a cold winter’s evening.