Liked what you read? Rate this page

Quinoa (pronounced kin-wa) is a grain native to South America, particularly Peru and Bolivia. It is estimated that quinoa was produced for human consumption approximately 3000 years ago, though it is only in the last few years that it has been gaining popularity in Canada, particularly since 2013, the International Year of Quinoa, as declared by the United Nations General Assembly.

An Introduction to Quinoa

Quinoa, part of the Amaranthaceae family, is a pseudo-cereal (true cereals are grasses, whereas pseudo-cereals are not, but are used in a similar way to true cereals) which grows 1-2 metres high. It is a hardy crop, able to grow in high altitudes, sandy soil, varying temperatures. In general, it is the seeds of the grain that are eaten. Quinoa is often seen as a superfood, as it is high in protein, low in gluten, and a good source of vitamins and minerals.

When quinoa was first cultivated by the Andean people it was viewed as a sacred crop. During the Spanish conquest of South America, however, its production was suppressed and wheat had to be grown instead. 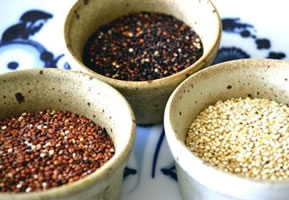 There are hundreds of varieties of quinoa ranging in colour from white to black, red, grey and yellow, and any colour in between.

White, red and black quinoa are the most common varieties of quinoa available in Canada. White quinoa is the most popular. It is the fluffiest and lightest type of quinoa once cooked, and has a delicate flavour. It can be used as a substitute for rice, whereas other varieties of quinoa work well in salads and dishes.

Black quinoa is coarser than red quinoa, with an earthier flavour than red quinoa, and again takes slightly longer to cook. There is little difference in nutritional value between the different types of quinoa, so it is really a question of availability, preference to taste or choice of recipe which determines which variety you should use.

Quinoa is considered to be gluten-free, making it a suitable substitute for wheat products for a coeliac diet. It is much higher in protein than other pseudo-cereals, containing all the essential amino acids. It is a good source of the B vitamins and is high in magnesium. Its nutritional value can be boosted through germination. Sprouting quinoa only takes approximately 3 days. It is available in Biosnacky Gourmet mix along with lentils and radish. 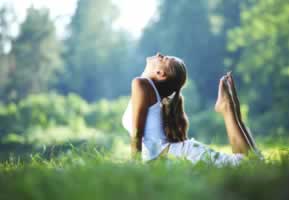 Quinoa contains two types of flavonoids, called Quercetin and Kaempferol. These flavonoids act as antioxidants which have numerous health benefits. Research so far suggests these benefits include anti-inflammatory and anti-viral properties.

Higher in protein than other grains or plant, quinoa is a good alternative to grain, particularly for vegetarians, or those looking to increase the amount of protein in their diet. Protein is important as it contains the amino acids that our body needs but cannot produce for itself.

Magnesium is an important mineral which is generally lacking from the Canadian diet. Magnesium is found in large quantities in dark green vegetables and nuts, for example, but also in quinoa. Soaking or sprouting the quinoa first helps the body to increase absorption of magnesium.

Quinoa is thought to increase metabolism and reduce appetite, which makes it an excellent alternative to grain for those trying to lose weight. More than other grains, it helps the body to burn the calories it is taking in, while making you feel fuller for longer after eating, helping to reduce unscheduled snacking.