Spinach is a dark green leafy vegetable, made popular by the character ‘Popeye the Sailor Man’ who became noticeably stronger after consuming spinach. The claim that Popeye makes to spinach is not misplaced; it is one of the most nutrient-rich leaves available. It is thought to originate in ancient Persia, making its way into England in the 14th century. During WWI, France gave wine fortified with spinach juice to injured soldiers to reduce the effects of haemorrhage.

An Introduction to Spinach

Spinach belongs to the Amaranthaceae family, along with beetroot and Swiss chard. In fact, the leaves of all three plants share a similar taste profile. It is an annual plant that grows to about 30cm.

Dishes made with spinach are often called ‘Florentine’ dating back to 1533, when the queen of France at the time, who was born in Florence, insisted that spinach was served in every meal.

Though many types of spinach exist, these can largely be split into three main varieties: Savoy spinach, Flat-leafed spinach and Semi-savoy spinach. Savoy spinach has dark green, curly leaves. The plants are very productive and can survive cold weather better than other types of spinach. As it grows close to the ground, cleaning the leaves before use can be somewhat of a chore.

Flat-leafed spinach have very smooth leaves, making them easier to clean than other types of spinach, and as a result tend to be used for processed spinach, such as in cans.

Semi-savoy spinach is a hybrid between the other two types of spinach. This makes an upright plant whose leaves are only slightly crinkled. It is the most resistant to disease, making it a popular choice of spinach to grow at home. 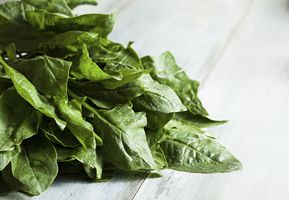 Spinach is one of the most nutritious vegetables available, packed full of minerals and vitamins. This coupled the fact that it is very low-calorie, low in saturated fats and in cholesterol, makes it a great addition to many dishes. Spinach is particularly high in vitamins K and A, with 100g of spinach providing 188% of your daily requirement of vitamin A. 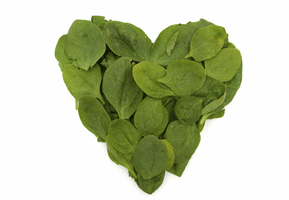 As spinach is so rich in nutrients, it is logical that it has many health benefits. Being particularly high in vitamin K, this is excellent for bone health, increasing bone density and reducing fractures.

Spinach is also extremely rich in potassium, containing more potassium than bananas. This is a mineral which also promotes good bone health, as well as allowing the heart and kidneys to function normally.

Vitamin A is important for healthy skin and hair. The vitamin A content of spinach helps to keep skin and hair moisturised, and reduces the effects of ageing on the skin. Vitamin A is also well known for promoting good eye health.

Rich in dietary fibre and in anti-inflammatory flavonoids, spinach is also good for your digestive health. Irritation in the digestive tract is reduced, allowing for regular bowel movements and better absorption of food.

How to grow spinach

Spinach is a popular plant to grow in the UK, often yielding a good crop of delicious nutrient-loaded leaves. It survives cold weather well, even enduring temperatures as low as 2̊C.

How to grow spinach >

How to cook spinach

Spinach is a great addition to many recipes and can be eaten either raw or cooked.

How to cook spinach >

Love a green smoothie? I know I do! Packed full of goodness, this is one of my favourite recipes and it’s a great way to kick start your day. Don’t be afraid to experiment with your greens.

I love recipes with spinach in them. It has so many health benefits, I like to include it in as many meals as possible. This creamy risotto recipe works well with Cod fillet too.