WHAT IS FINGER LIME?

The Finger Lime is a native Australian Bush Fruit tree that has been a valuable source of aboriginal bush tucker for thousands of years. Not only is it delicious, but it was known to ward off disease. The caviar-like pulp was used topically to treat infections of the skin. Modern-day science now tells us that finger limes are rich in the antioxidant vitamin E, and amazingly, they have three times the amount of vitamin C than a mandarin. They also contain high levels of folate and potassium.

For thousands of years, the Native Finger Lime grew naturally in the subtropical rainforest along the border region of Southeast Queensland and New South Wales, part of the Bundjalung language nation. Unfortunately, European settlement saw the destruction and deforestation of the rainforest to make way for farmland. Thankfully, some ancient trees survived in small isolated parts of subtropical rainforests, private land, and national parks. Gradually as the Finger Lime becomes more popular and the benefits that far surpass other immunity booster fruits become known, we can ensure the survival of this Native Australian Bush Tucker.

Untamed Health started with a simple idea: providing organic food that gives back. But not just any ordinary organic food – it had to taste extraordinary. It had to be unique and, it had to involve chocolate. We asked ourselves: "What can we do differently?"

Then it clicked. We had the idea of creating organic, ethically sourced chocolate bars using native Australian bush fruits – something that hasn't been done before. Better still, we decided to donate 5% of all profits to worthwhile causes that benefit Indigenous Australian and Torres Strait Islander communities.

One of the deluxe organic chocolate bars is infused with a subtle hint of Native Davidson Plum that packs a powerful antioxidant punch along with a fresh, tangy flavour.

Although Untamed Health is a small Australian family-run business, we have a mission to make a big impact.

With each lip-smacking bite you'll also be supporting local growers who are actively recultivating endangered bush fruits throughout Australia's rainforests. Sadly, land clearing since European settlement destroyed much of these nutritious bush fruits.

By buying a bar of Untamed Health chocolate, you can give back while you give in to another bite of gluten-free, guilt-free (but certainly not taste-free) organic chocolate.

Maybe present: This product contains milk solids and may contain traces of soy (lecithin), peanuts and/or other tree nuts. 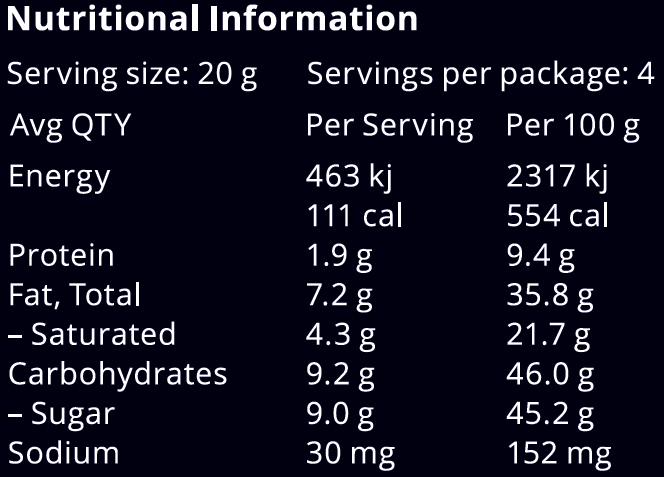